I’m working on a demo using Oculus Rift and Unity 3D. I want to give the player the ability to move around in 3-dimensional space, as in a fly-through. The default settings for OVRPlayerController (a prefab available from the Oculus Unity 4 Integration package available here), however, require the player to walk around on a plane, and gravity is in effect by default. Moreover, the rotation of the OVRPlayerController is locked around the Y-axis (that is, the axis perpendicular to the plane OVRPlayerController is standing on), so one’s movement is locked on the X-Z plane - not great for a fly-through.

I found a way to remove these restrictions and move around freely in three dimensions. I couldn’t find this anywhere online, so I hope this is helpful to someone. (At the time of writing this I’m using Unity 5.1.1f1 with Oculus DK2 on OSX with version 0.5.0 of the Oculus Unity Integration package.)

Here’s a diff of the changes in case these aren’t easy directions to follow.

First, we have to make sure we’re not affected by gravity. Do this by setting the Gravity Modifier for OVRPlayerController to zero: 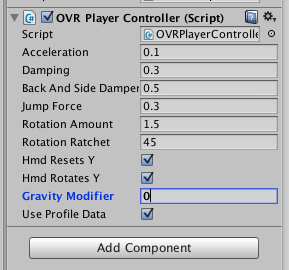 OVRPlayerController won’t move if it’s not grounded on a plane, so we have to give it the ability to move if not grounded. This can be done by commenting out the check for this condition:

There’s also another place where the OVRPlayerController’s transform’s X- and Z-axis rotation is set to 0, so let’s change that…

And last, if you don’t make the following change, the player will move in the direction gravity pulls it, but at a steady rate. I don’t quite understand why this needs to be changed, but it worked for me.

Now you should be able to fly through your environment.